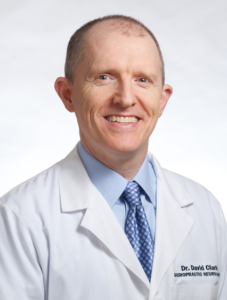 ​Dr. David Clark found Chiropractic during his journey to change his own health and poor habits. Before obtaining his Doctor of Chiropractic degree he studied the use of herbs and nutrition as methods to improve health without drugs and surgery. After reading the chiropractic philosophy that the body has the ability to heal itself naturally through unrestricted communication with brain and nervous system, he knew instantly that becoming a chiropractor would allow him to help as many people as possible and fulfill his passion for education.

In 2005 Dr. Clark became one of less than 1,000 board-certified Chiropractic Neurologists in the world. Chiropractic Neurology is the newest, state of the art diagnostic and treatment discipline. It brings together current research findings from fields such as psychology, neuropsychiatry, neurology, neurophysiology and nutrition—and uses this knowledge to bring hope to the sick, unhappy and hurting of all ages.

Dr. Clark continues to train extensively in neurology in order to stay current with new research findings and offer his patients the most effective and individualized treatment recommendations.

In April of 2008 he received a second Chiropractic Neurology Certification as a Vestibular Rehabilitation Specialist. With this training Dr. Clark offers a drug-free solution to those suffering from vertigo, dizziness and balance problems.

In March 2010, he was honored as a Diplomate of the College of Clinical Nutrition.

In 2012 he completed 75 hours of training in Movement Disorders under the instruction of world-renowned clinician and pioneer Dr. Frederick Carrick.

​In 2017, Dr. Clark created and taught the 3 day course "Mastery of the Thyroid-Brain Axis" for the Carrick Institute.

​In 2018, he created and taught the 3 day course "Mastery of the Neurochemistry of Autism Spectrum Disorders"

And as if that weren’t enough…

Dr. Clark ​continues to study and research in all areas of human physiology (Immunology, Endocrinology, Gastroenterology etc). He has combined his life’s learning to create Clark Brain-Based Rehabilitation®–a true breakthrough in helping neurological and metabolic disorders.

Dr. Clark has lectured at leading chiropractic colleges, medical schools and private schools on topics such as alternative medicine, nutrition, neurology and learning/behavior problems such ADHD, Autism and Dyslexia.

He travels the United States and the globe to teach other clinicians Clinical Neuroscience, Neurochemistry & Nutrition.